(New York Jewish Week) — Award-winning Jewish artist Steve Marcus, 50, has made a career creating artwork for publications like Rolling Stone, the New York Times and Esquire, as well as for clients like MTV and Random House.

And now, in an exhibition of new work that opens Thursday, May 12 at the Museum at Eldridge Street, Marcus has turned his attention to something quite a bit more workaday and humble: the hot dog.

“Steve Marcus: Top Dog of Kosher Pop Art” is a collection of cartoon-like, hand-drawn illustrations about hot dogs that run the gamut from history to fantasy.

Another illustration, “Rabbi Frank and the Frank Tank” shows a kosher version of Oscar Mayer’s Wienermobile parked outside the Lower East Side stalwart Katz’s Deli.

“Steve’s drawings are crammed full of detail, wry observations and nuggets of history,” curator Nancy Johnson said in a statement. “His work tells a story with deep roots in Jewish life and immigrant culture — it’s the American dream on a bun!”

Though he’s had brief stints in Northern California and Brooklyn, Marcus has lived and worked on the Lower East Side for more than 25 years. He has drawn inspiration from the diverse urban landscape as well as the deep Jewish roots of the neighborhood and the time he spent studying Torah locally at Mesivta Tifereth Jerusalem, one of the oldest yeshivas in the city.

Over the years, Marcus has also created a bunch of illustrations and posters for the cannabis legalization movement — you may be familiar with his work if you’ve checked out or read about YIVO’s groundbreaking new exhibit, Am Yisrael High: The Story of Jews and Cannabis. Marcus created the poster for the exhibit, and he also has seven pieces in the exhibition, all created in the 1990s and early 2000s, that he said will be included in YIVO’s archives. 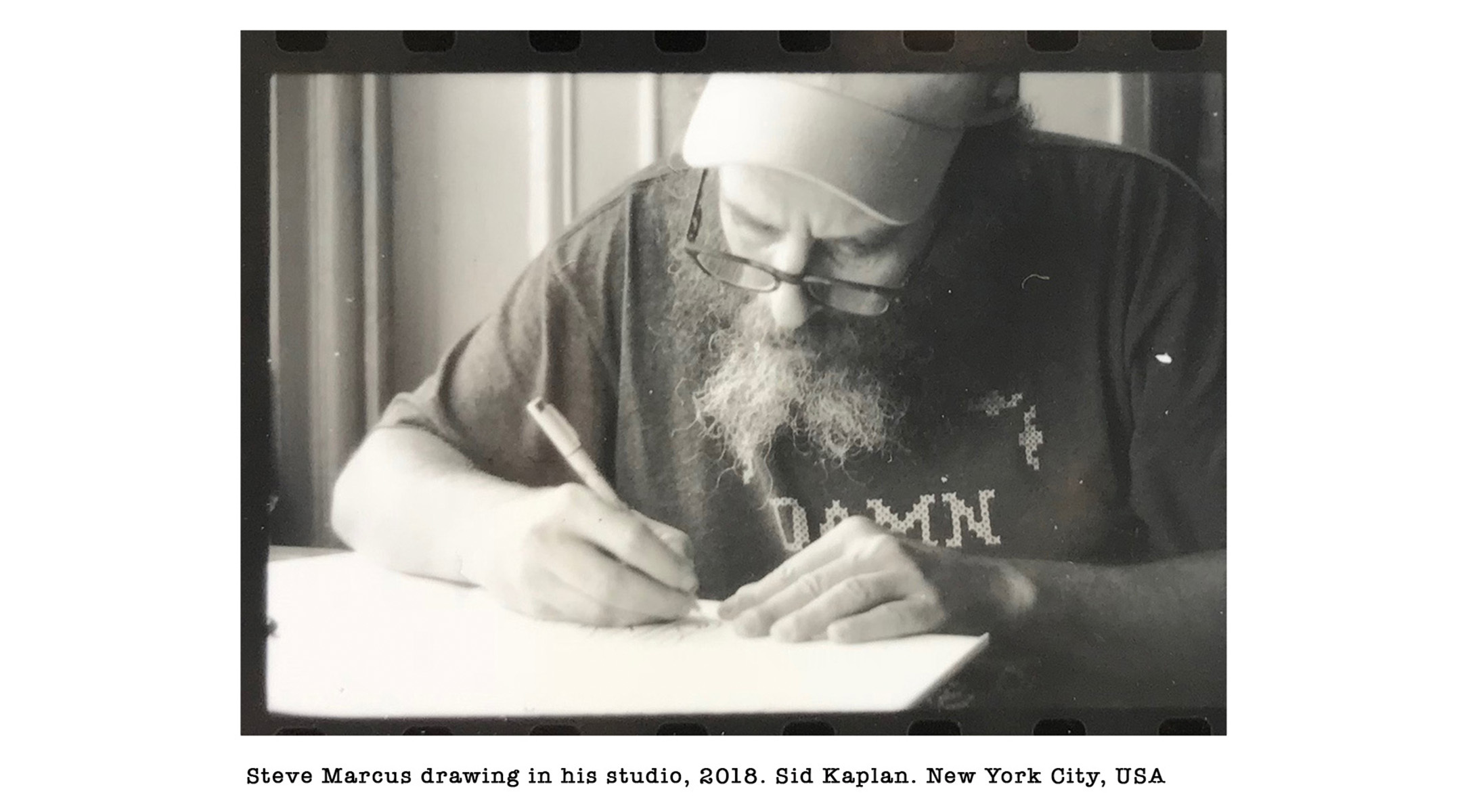 “It was an outlaw scene filled with a memorable cast of characters, but now it’s mainstream,” Marcus told the New York Jewish Week, reflecting on the movement to legalize weed. “It’s incredible that my work from the Cannabis Reform Movement is now included in the American History collection at the Harvard Library, and is also in the permanent collection at the Oakland Museum of California, because when I created this body of artwork I didn’t imagine it would become part of history and change America.”

When asked if he ever thought his affinities for cannabis culture and Jewish culture would align this way, Marcus quoted a famous Grateful Dead lyric: “What a long, strange trip it’s been.”

On the eve of the opening of his hot dog show, Marcus responded to the New York Jewish Week’s “Four Questions,” sharing with us his takes on America’s love for hot dogs; how Jewish history informs his contemporary art, and how his 6-year-old nephew inspired this exhibition.

This interview has been edited for length and clarity.

Our nonprofit newsroom depends on readers like you. Make a donation now to support independent Jewish journalism in New York.

1. New York Jewish Week: First things first: What inspired you to do a series of works about kosher hot dogs?

Steve Marcus: This particular series of works was inspired by my 6-year-old nephew, Nate “Nati” Gottlieb, who in the summer of 2021 came to visit me at my off-the-grid cabin on 30 acres in the middle of nowhere to celebrate my birthday weekend with a camping trip. He drew me a birthday card that pictured us roasting hot dogs on a stick over a campfire and, upon seeing his drawing, I quickly made a fire and put hot dogs on sticks. He proceeded to roast a hot dog on a stick over the open flame for the first time — and, as he was doing this, he looked over to me while sitting on a rock and said, “Uncle Steve, this is one of my dreams coming true.” It was then and there that I decided to make a series of art based on hot dogs, that people of all ages could relish.

2. You’ve lived and worked in the Lower East Side for some 25 years. Tell me about the connection between your hot dog project and the museum, which is housed in the 19th-century Eldridge Street Synagogue — were you inspired by the venue, and what connections do you make between the synagogue, the neighborhood and this exhibit?

As I walk from my apartment to the Museum at Eldridge Street, I stroll past addresses that are landmarks in hot dog history. My daily morning routine brings me past the original site of the Hebrew National kosher sausage factory, founded at 155 East Broadway in 1905, and when I return home, I pass 37 Essex Street, the address of Isaac Gellis Provisions. Isaac Gellis was the “kosher sausage king of America” and known as the richest person on the Lower East Side, and who was also a congregant at the Eldridge Street Synagogue. The Lower East Side is so rich with history and trivia, every nook and cranny has a story to tell. I love to create artwork that is fun and humorous yet connected to history and my roots and culture. 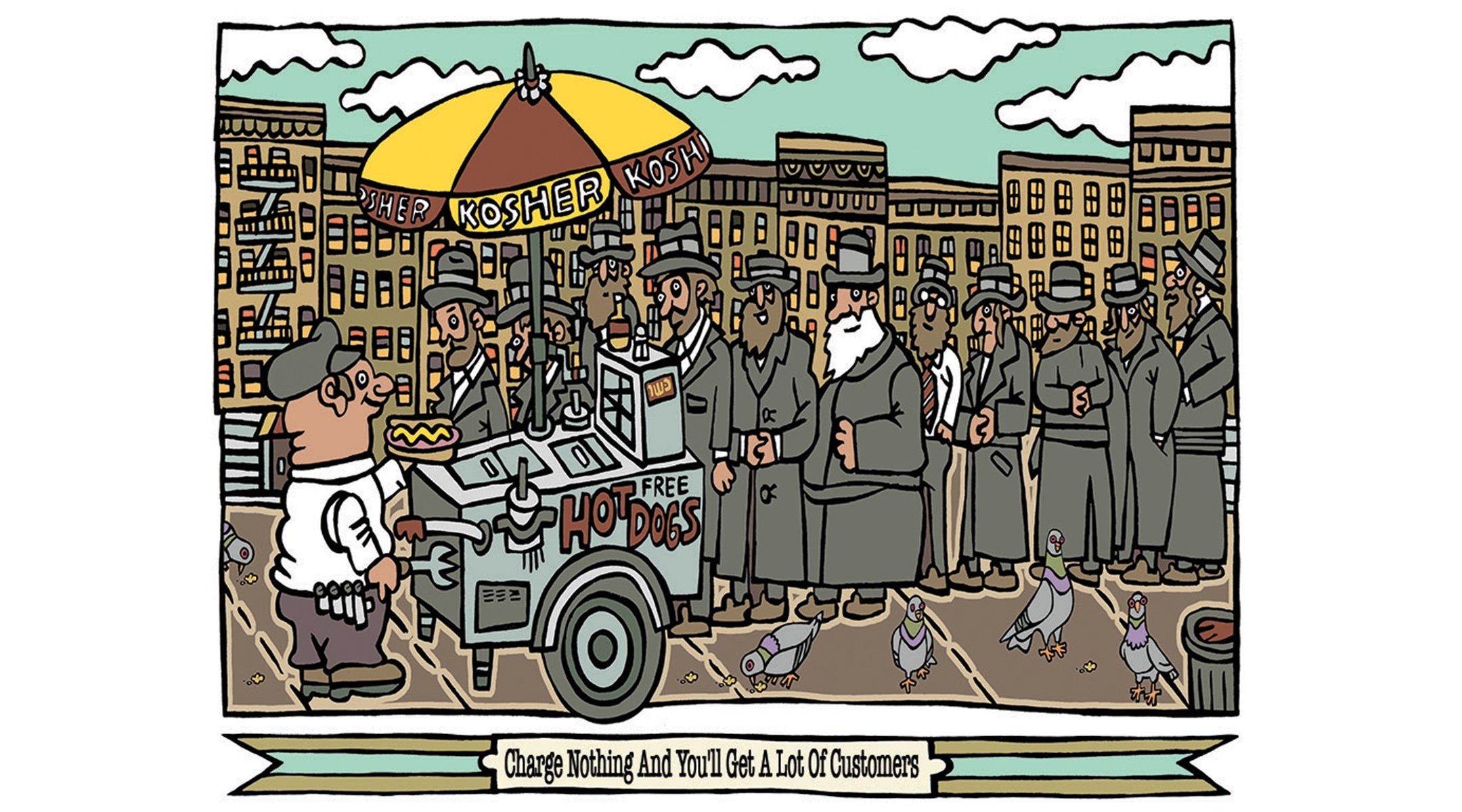 3. Freud famously said, “Sometimes a cigar is just a cigar.” Is a hot dog ever just a hot dog? What does the imagery mean to you as a Jew, a New Yorker and an artist?”

Today, in America, over 7 billion hot dogs, or 818 hot dogs per second, are consumed during peak grilling season, from Memorial Day to Labor Day, according to the National Hot Dog and Sausage Council — which obviously proves that people love hot dogs. I love things that bring us together rather than divide us, so whether your preference is a kosher, all-beef, pork or meatless hot dog, I look forward to the day that we can respect and recognize the common links that connect us all, and finally and eat the hot dog of your preference together in peace.

4. You’ve been recognized as a culturally influential resident in the anthology “Jews, The People’s History of the Lower East Side.” How does your Jewish identity inspire your work?

My art is heavily influenced by cartoons and underground comics and I’ve maintained that style throughout my career. I call my new work “Kosher Folk Art,” “Pop Judaica” or “Contemporary Ethnic Art” because it’s an expression of my traditional culture and rooted in the traditions that come from my community and its history while still maintaining my contemporary aesthetics and style. It expresses and shares my cultural and religious identity by conveying its shared communal values with the viewer while linking my quirky sense of humor with my passion for my own roots and culture. Like it or not, no one can accuse me of cultural appropriation.

Bonus question:  What’s your favorite place in NYC to get a hot dog?

My favorite place to eat is home because, for me, nothing can compete with home cooking.

A street art festival on Stamford’s West Side? Organizers hope to start a trend.

How to Choose Artwork Titles, Keywords, and Descriptions